May 24, 2018
First off COSEWIC just released some good and bad news about the status of birds in Canada.

Common Nighthawks and Olive-sided Flycatchers have been downgraded from "Threatened" to "Special Concern." Unfortunately, Red-headed Woodpeckers have been up-listed to "Endangered".  The Coastal Vesper Sparrow (which I've seen in San Juan Island) is still "Endangered" as is the Streaked Horned Lark in Canada. There is no evidence that a breeding population of either subspecies remains in Canada, but there is a slim chance for recolonization from the U.S. To read the full list from COSEWIC click HERE.

Speaking about threatened birds Birdlife International made a new animated video about the plight of Red Knots and other migrating shorebirds; the video is below.

Also if you are passionate about wildlife conservation you will do yourself a great service by reading this refreshing take by Dr. Marc Bekoff about how important it is to have COMPASSION, where we actively practice these principles:
Click HERE to read it in full.

Today I was feeling very sad, so I went out and photographed birds. I found some beautiful Savannah Sparrows on the lupines in Richmond and had a little photo session. Birds always do such a good job of cheering us up.

Here is a shot from my Savannah/lupine session. 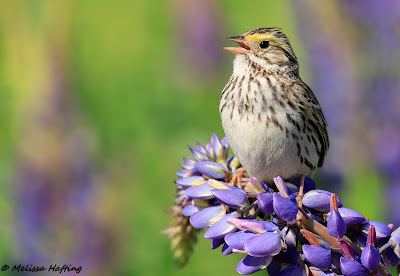