Showing posts from April, 2017
Show all

Birds, Birds and more Birds in the Lonestar State. 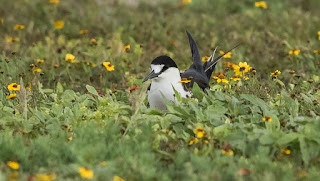 Ilya Povalyaev and I went down to Texas for the first time in our lives this past April from April 7-23rd. We had been planning this trip for over a year and talked to many of our friends such as Paul Prappas, Jon Corcoran, Russell Cannings, Brian Stech and Chris Charlesworth who helped give us invaluable tips on where to visit. We also bought both Texas ABA Guides (A Birder's Guide to the TX Coast and Rio Grande Valley) and found them to be an absolute Godsend and still mostly accurate despite being written in 2006 and 2008 . We flew into San Antonio and went straight to visit the Monk Parakeet roost. They were nesting with their big stick nests on transmission line towers. It was neat watching them carry and add nesting material to an already huge nest. In the evening, we had a nice meal on San Antonio's River Walk. We watched motorized gondolas go by along the river canals and tried to turn every Mallard into a Mexican one.   After that
3 comments
Read more
More posts