Showing posts from July, 2016
Show all

We had a great time today on the Puffin Pelagic Trip out of Bellingham, WA. Twelve Canadians that I knew were on board and the boat was sold out with 39 people plus 3 crew. If you would like to book this trip in the future please click HERE The trip started off great from the beginning when Peter Candido (view his great blog HERE )  spotted an adult Green Heron fishing from the sea at the Alaska Ferry Terminal in Bellingham. We ended up seeing 20 Tufted Puffins in the water around the breeding colony at Smith Island. You can't go right up to the island since it is a protected marine reserve and the water is shallow around the island plus the birds burrows are at the top of the island where it is hard to see in. We ended up seeing some other unexpected birds including an adult Long-tailed Jaeger and Ancient Murrelet that Ilya Povalyaev spotted from the bow. Both of these birds are early for the area. We saw how close these birds are to Victoria and probably these are
Post a Comment
Read more 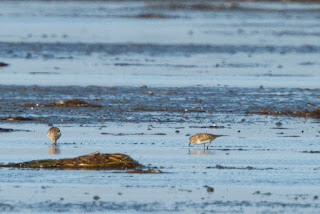 My 400th BC Bird was a Red-necked Stint found by Kevin Louth on July 22nd at Boundary Bay in Delta, BC. I saw the bird the following morning. Ilya had got up super early and was out on the mudfltas with Kevin Louth and Daniele Mithchell when they relocated the bird. They called me and I dashed with my skirt and flip flops to 72nd ST at Boundary Bay.  When I got there I ran into Mike and Sharon Toochin and we walked together down to 80th avenue where the guys were on the mudflats. The guys were wayyyy out and I didn't even bother to attempt to walk int he mud in my flip flops. I walked through the gross stinky seaweed and logs and then got to the mud. Here I left my flip flops and hoped they would still be here and not carried away with the tide when I got back. I ran as fast as I can through the sticky mud and got to Kevin and the guys. Kevin was making some jokes as he always does. He is absolutely hilarious and at that moment in time they had lost the bird as the flock of Wester
Post a Comment
Read more

White-faced Ibis in the Lower Mainland? 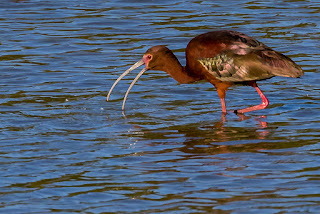 Wayne Diakow found this solitary White-faced Ibis in the SW pond at Reifel in Ladner. This is a rare Vancouver bird for us all in the Lower Mainland.I have never seen one in the city. It is a provincial rarity that seems to be getting more and more common in the province yearly. I have seen them several other places in BC including in the Quilchena area at Separation Lake and Beaver Ranch Flats. I have also seen it of course in other parts of Canada and the US but to have one in your backyard, so to speak, is pretty special. This is the second record of the bird at Reifel Bird Sanctuary. The bird is in worn breeding plumage but is still so stunning when the light hits its feathers. Thanks to Kathleen Fry for keeping the sanctuary open late so many could see this bird after work. You can read more about this sighting at my other blog the BC RBA HERE White-faced Ibis in Delta - Photo: Melissa Hafting
Post a Comment
Read more 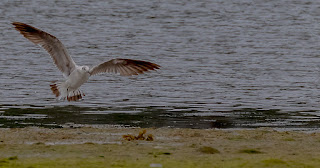 This is the first photo documented record of this species in BC, thereby making it the first official record for the Province. The bird was first found yesterday by Kerry Finley. This bird is a second cycle bird. It was found at Roberts Bay at the Shoal Harbour Migratory Bird Sanctuary in Sidney, BC. The last Laughing Gull I saw was in January in San Diego, CA so was super cool to see this rare bird close to home! WA state got a Laughing Gull as well but it was deemed a different bird than ours. Laughing Gull in BC - Photo: Melissa Hafting   You can read more about this sighting at my other blog the BC RBA HERE
Post a Comment
Read more
More posts