We had a great turnout yesterday for the Christmas Bird Count for Kids (aged 12-18) in Delta. We had 15 kids turn up and 2 came from Seattle and Bellingham, WA and 2 from Tofino on Vancouver Island. We also had 3 from the Fraser Valley (Agassiz and Chilliwack). It was really cool to have so many new youth come out from such great distances for the count!

I was happy to see Cedar again, as I haven't seen her since May at the Ucluelet pelagic. Cedar's dad, Cedar and her friend Maizzy were sweet to come all this way for our count. Cedar even baked me some delicious baked treats and painted me this beautiful card of a Hooded Merganser in a cool winter scarf! I was touched by the kind words inside. She, like so many of the youth in my young birder program are such talented artists!


It was nice to finally meet Kaylin and Isaiah from Seattle and Bellingham, WA. I was really happy to meet Daniel and Jason from the Fraser Valley and Zac and Reid from Vancouver. I have been chatting about birds with them online for quiet some time, so it was great to put faces to names and meet more amazing youth birders in the community. I am happy to have more birders to nominate for young birder awards and to hopefully come on our future field trips. I was no less happy to see my regulars at the event; Bridget, Joshua, Viktor, Marnix and Adam. Big thanks to Else Mikkelsen for her help during the count and for teaching the kids about the history behind the count. I and the youth were also impressed with the fun facts about birds she shared with them. Soon, Else will be off to study her Ph.D. in Toronto and we will all surely miss her in the BCFO Young Birder Program. She  has helped me on several Ptarmigan hikes that we did in Whistler and Flatiron Mtn, and she is a great friend as well. We wish her all the luck (not that she needs it, she is so bright) in the world as she pursues her doctorate in genetics in Ornithology. Thanks also to Ilya Povalyaev for helping me with the kids and for explaining to them how  to do the "grid counting technique" to count large flocks of birds.

As soon as we got going at 9 am at the foot of 72nd St on the Boundary Bay dyke, we were impressed with the number of Rough-legged Hawks we saw, two of them were even wing tagged with the numbers "5N" and "3N".  I reported both to Gary Searing at YVR who tags them. 3N was tagged on 16 October 2017 and 5N was tagged on 7 November 2017. They were both juvenile (hatched 2017) females and were released near Chilliwack the day after they captured them. Cedar was happy to have great scope views of her lifer Roughie! Soon after one perched for us near the 80th St pumphouse up close beside a Red-tailed Hawk with a bill deformity.


As we walked in the direction towards 96th St, we had a Barn Swallow fly overhead. This was a late sighting for the year. Sadly, most likely, this late wintering swallow won't make it.


We saw 4 Short-eared Owls during the count and they all posed nicely for us giving us full frontal views! Zac got his lifer Northern Shrike and we saw 4 Eurasian Wigeons and both male and female Northern Harriers. We all enjoyed the beauty of the "Gray Ghost" as it flew by us.


We searched through all the Yellow-rumped Warblers and Sparrows for the reported Harris's Sparrow but could not turn him up.

Northern Flickers were littered down the path. We saw a Peregrine Falcon chasing Dunlin and Black-bellied Plovers on the mudflats and watched the shorebirds through the scope. We then walked back towards 64th St. As we got to the substation we saw many Purple Finches, Golden and White-crowned Sparrows and more Yellow-rumped Warblers and more Shorties. 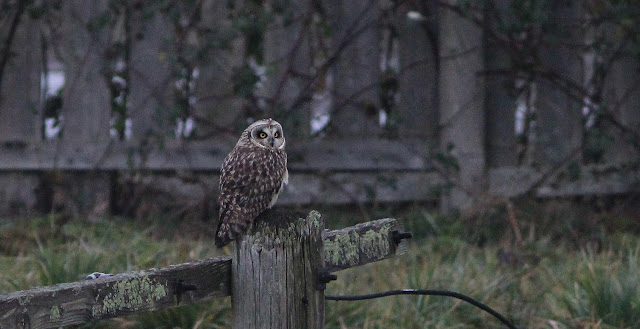 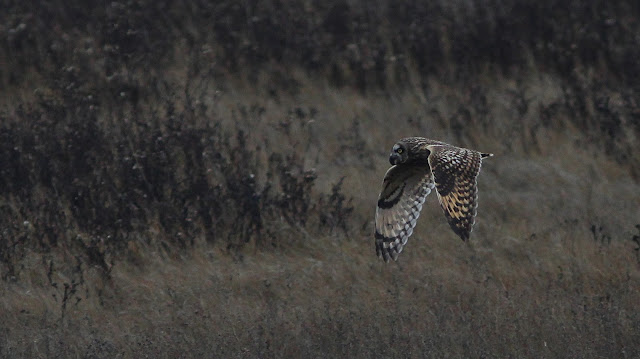 We then went back along the dyke searching every bush for any birds we might find and went up to the turf farm. There I gave the kids some delicious baked goods that Bridget and her sister Virginia expertly prepared  for us as we scoped for the reported Glaucous Gulls. I found one 1st winter Glaucous Gull but as soon as I had it in the scope the workers at the turf farm blasted the air gun to disperse the gulls. We tried to refind the Glaucous Gull but could not before our time ran out as parents were coming to pick up the youth. However, we did find many Iceland Gulls (Thayer's Subspecies) and a few Herring Gulls, Olympic Gulls (Western X Glaucous-winged hybrids), Glaucous-winged Gulls, a few Mews and Ring-billeds. We all deliberated about how Thayer's are now considered Iceland Gulls. None of the kids seemed to approve of the choice.


We went back to the foot of 72nd St for our "tally up" and had some delicious warm hot chocolate that I prepared earlier that morning. The kids told me it was in the largest thermos they ever saw haha! I ordered it off Amazon and it really worked well for the event it was piping hot and welcome on the balmy day.

Here is the list of our count total of 46 species:

I asked the kids what the highlights were for them and they said: "Barn Swallow", "Northern Shrike", "5 Rough-legged Hawks" and "Short-eared Owls." We really did pretty darn good for 3 hours of birding to get that many species.

My highlight was being with all the kids on a great half day of birding. I was so happy that the weather was nice this year in comparison to our previous CBC4Kids counts, which were downright cold and miserable. This is what the Vancouver Count was like today for the adults! We were like drowned rats at Iona.  I'm so glad the kids didn't have to endure such weather. After the count we went to Maplewood Flats in North Van where we saw a Northern Goshawk and some Redpolls.

Getting back to the youth, after our CBC4Kids ended, many of the youth went and saw the rare Summer Tanager in Vancouver. They sent me excited texts one after the other, as their lifer appeared! It was a really nice way for them to cap off their day and I was so happy for them. Across the pond in Victoria another amazing youth birder Liam Singh did very well and found a Great Egret! These youth are incredible I tell ya!


Thanks again to everyone who came out from near and far, to make our count such a great day of birding!
young birder trip young birders