May 20, 2018
I went down with my friend Blair on Friday to see Red Knots at Bottle Beach in WA. I ended up meeting scientific researchers from Alaska with the United States Fish and Wildlife Service (USFWS), who have banded and tagged them with radio transmitters. They were at the beach looking for their flagged birds.  To read more about why scientists are studying the Climate-endangered Red Knot click HERE. To read about the impact of the Canadian study click HERE, both the USA and Canada list the bird as Endangered.

During my visit we counted 500 breeding plumaged Red Knots and dozen of Ruddy Turnstones. It was incredible as I had never seen that number of Red Knots ever in one spot. Hearing them and watching them fly in the large flocks was breathtaking. I took off my shoes and walked barefoot onto the mudflats. Other shorebirds present were Whimbrel, Greater Yellowlegs, Dunlin, Black Turnstones, Short-billed Dowitchers and Black-bellied Plovers. Had my FOY Brown Pelican too for WA!

The researchers found many of their birds that nest in Alaska but they also found a single bird from Russia which they were extremely excited about!

The day before they had counted 850 Red Knots and found an Elegant Tern. The only Elegant Terns I have ever seen were in WA but I was not to see one that day.

However, I couldn't complain after a day of pure magic.

Here are some of my shots from the day. 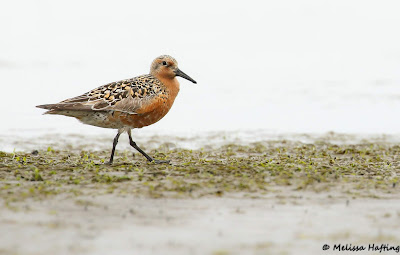 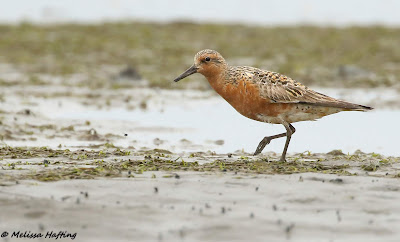 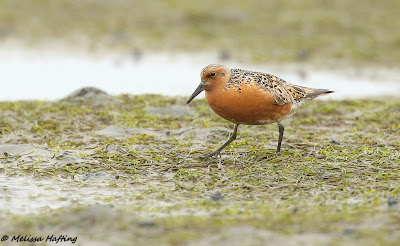