August 15, 2017
Yesterday, 9 of us went to Whistler via the "Epic Rides Shuttle." We took the peak express all the way to the summit at the "Top of the World" and hiked the High Note Trail. We were hoping for White-tailed Ptarmigan but we never saw one. We are all quite used to it now, it's our Golden Goose so to speak. One day we know we will just trip over one....

Our hike was beautiful and eventful, especially when we sat down for a break and my camera bag went barrelling down the hill like a bowling ball. It was just gone at rocket speed. I expected my thousands of dollars of camera gear, wallet full of money and visa and debit cards, driver's license and phone were gone for good. I mean I saw it fly off a cliff and bounce down a rocky hill at lightening speed. I saw Hoary Marmots scatter and scream in every direction as the blue bag came careening at them full throttle. If it wasn't full of expensive gear the scene may have been comical.

Other hikers saw this bag go flying down the mountain and thought a human was falling down with it, what a gong show...

Anyways the bag was ultimately retrieved by my amazing Young Birders and they found everything except for my water bottle. We had to call my phone to find it in a stream strewn far from the bag. The bag was zipped up and closed when it went down the mountain but when it landed it was open and my camera and lens and teleconverter, keys, money, cards were all 3 feet from the bag. Surprisingly it wasn't in pieces?

Thanks Kids for helping me yesterday, man that was crazy. My camera appears to be working fine and so is everything else but the expensive lens needs repair but at least it won't be as expensive as buying a new one.

Getting back to the trip.... we did not see a Ptarmigan but we weren't surprised. The mountain had hardly anyone on it for once, so we thought we may actually have a shot this time... but no haha!

We saw over 15 Hoary Marmots though as many had young. We also saw many American Pikas. The Pikas were out alarming and we ended up seeing 3 of them. I finally got a shot of one too. These animals are related to Rabbits and are part of the lagomorph family some people call them "Whistling Hares." We saw 2 Black Bears as well.

Our hike was 8.3km long on the High Note Trail. It was a beautiful hike, it seemed as if we were walking on the moon. We could see the spectacular "Black Tusk" mountain across from us in Garibaldi Provincial Park. We went through prime White-tailed Ptarmigan habitat too.

I heard this quote below yesterday and it really reinforced my beliefs that when kids are connected to nature, the world ian a better place.

"If a child never sees the stars, never has meaningful encounters with other species, never experiences the richness of nature, what happens to that child?"-Richard Louv 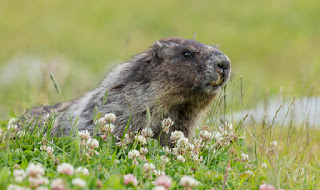 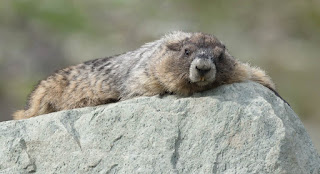