April 17, 2018
Today I saw a Sage Thrasher thanks to Rosemary and Paul Clapham who relocated the bird tonight. I had gone there in the early afternoon to see if I could refind the bird but no luck many of my friends were there trying too. It was nice to spend some time with Hilary, Monica, Susan, Carlo and Norma but we came up empty! I did however enjoy looking at my FOY male Cinnamon Teal and seeing the lone juvie Snow Goose. I have to say though at Piper Spit my attention always drifts to the tiny Green-winged Teal. I have a beautiful photo of the female but was craving a decent shot of the male. Today I finally got it. 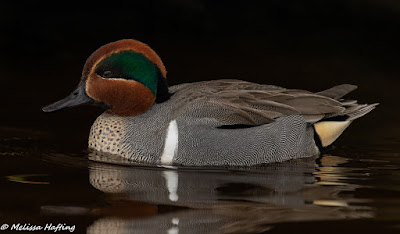 The Sage Thrasher which I saw about 6 hours later not so much but you can tell what it is! It was  new metro Vancouver bird for me Bird # 310. Was nice to share it with my friend Rob Lyske and the Claphams.


Before I saw the Sage Thrasher at about 7:45pm (I brought a flashlight 😉), I headed to Iona where I saw my FOY Cliff Swallows and Yellow-headed Blackbird. I also saw the 2 Says Phoebes (great year for them), Cackling Geese, Osprey, Caspian Terns and a Merlin. A pretty good day if I say so myself.

Hoping tomorrow brings another in the form of a Great-tailed Grackle which would not only be a Vancouver bird but a BC bird (#418) for me.