April 07, 2018
Today I am grateful for and want to shine a spotlight on Northern Spotted Owls who are sadly just about extirpated in BC. I had a magic moment with a beautiful endangered Spotted Owl family in WA this summer. It's always a privilege for me to see them. I never know each year if I will find them again. This year one of the pairs I had seen the year before had Barred Owls in their territory and they were nowhere to be found. It's heartbreaking when that happens. These owls have been through hell and back due to habitat loss and logging of old growth forests, climate change, Barred Owl expansion (that we orchestrated) and recently believe it or not, rat poison is affecting them, which you can read about HERE. Rat poison needs to be banned, it is killing so many owls of all species, especially recently here in the lower mainland.

So much...too much pressure on a beautiful owl.

Well on top of this in the US, The Trump administration is proposing rolling back protections for close to 300 threatened animal and plant species and guess what?.. the Northern Spotted Owl is one of those birds.

The new proposal would ease restrictions for companies that operate in wildlife habitats. “Removal of Blanket Section 4(d) Rule” and was posted Monday by the Department of the Interior. "If enacted, this rule could be the end for iconic wildlife like the northern spotted owl." You can read about it HERE

Due to extreme mismanagement. BC has less than a dozen birds left in the wild and extirpation in Canada is looming. Once old growth forests are logged and gone, the captive breeding program can do little to recover the population. So far no birds have been released but 2 adult Spotted Owls need a huge area of old growth forest to hunt and raise their young in. These species and their prey (mostly flying squirrels and wood rats) are so habitat specific that it's really too little to late for any captive breeding program to be of any success here. Because once the old growth forest is cut down, it takes 100-200 years to mature. There is a professional video made of the Northern Spotted Owl showing the incredible emotion one goes through when you refind one of these disappearing owls HERE.

WA, OR and CA still have these owls in low numbers and we need to do all we can to protect them in the Pacific Northwest. A world without them would be very bleak indeed.

The government in BC and WA have been killing the invasive Barred Owls but without much success. As soon as you kill one a new one moves in and why should the Barred Owls suffer. This is an entirely human caused problem that of course another animal has to suffer for. Actually 2 species have to suffer... due to our stupid mistakes. The same thing happened to our Western (coastal) Screech-Owls in the Lower Mainland which are completely extirpated here. You can find that subspecies in the Fraser Valley, Whistler, Vancouver Island and Sunshine Coast in small numbers.

The owls in the photographs are rarely seen by humans so they are as curious and tame as ever. Mom actually flew in to investigate me and when she was sufficiently bored she fell asleep. The babies were located further down the mountain and they were very curious bobbing their cute heads and all inquisitive. They were in the awkward teenage years. These guys have a tough road ahead of them but at least in WA they had a fighting chance not sure now with Trump's new proposed legislation. In WA theystill have about 300 wild birds and larger un-fragmented old growth forests that were protected unlike our 10 wild birds and tiny amounts of un-fragmented old growth forests. It's a similar story to the Greater Sage-Grouse we used to have in the Okanagan, where the sagebrush is just too fragmented, it's a miracle we have any Sage Thrashers at all today and no surprise that Sagebrush Sparrows haven't made it up here to breed, due to the fragmentation of the sagebrush habitat, there is no continuous nesting territory for them on the Canadian side of the border.

If we only saw the bigger picture way back then, but now that we are so fully informed why do we continue down the same destructive paths? This I'll never know...

I hope I have many more years with the Northern Spotted Owls but their prognosis now even in WA is poor.

You can watch a (shaky) video I made of the female this past summer preening below and you can listen to an old recording I made of a male HERE. 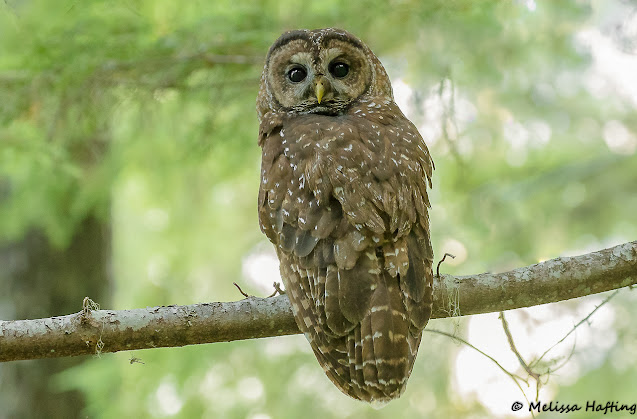 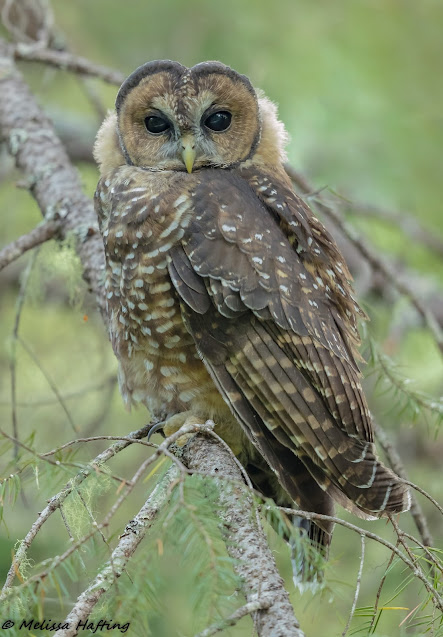 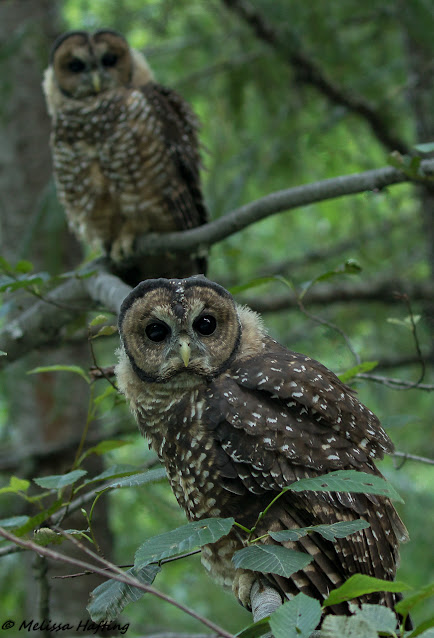 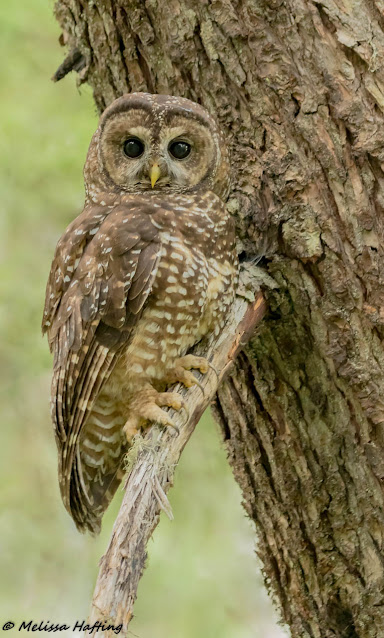 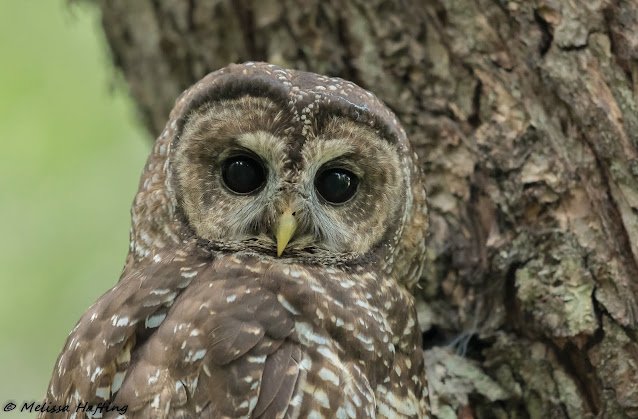 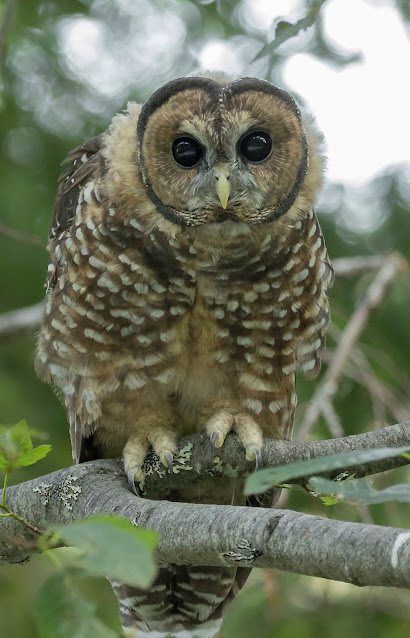 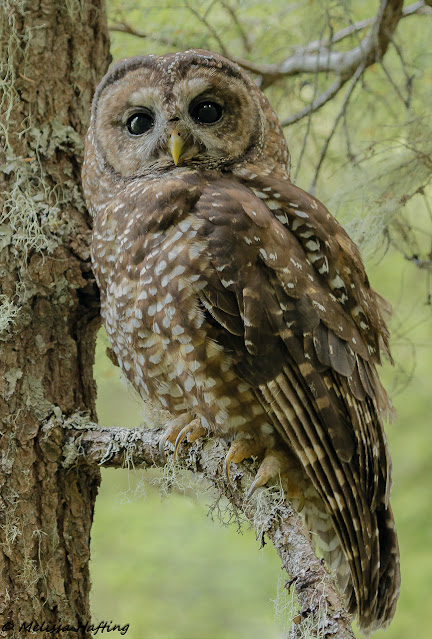 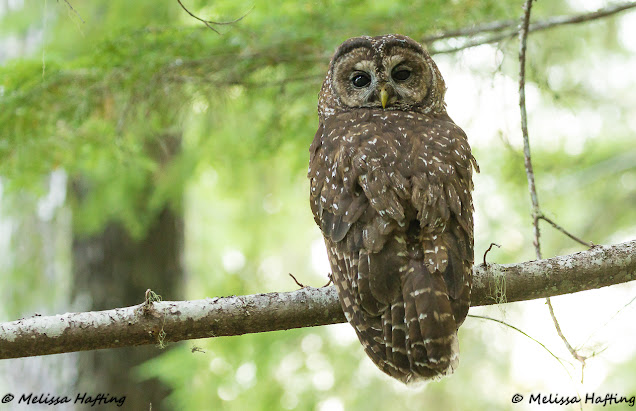