A really nice day with Bluebirds and more in Squamish and White-winged Crossbills...

April 01, 2018
We went birding in Squamish yesterday and had a fantastic time. It was so nice to get away from the city and be alone in nature. I called up my friend Chris Dale and met him at the spit and there we found 20 Mountain Bluebirds which was a beautiful sight. They were distant scope views only. We also saw a male Eurasian Wigeon which is a very good bird for the estuary. At the end of the spit we saw about 5 Sea Lions which is also odd for the estuary and many seals (which are not odd). It was fun watching the Common Goldeneyes and the Barrow's and Buffleheads doing their courtship displays. I was nostalgic watching all these ducks as come April they will most likely be gone to their breeding grounds. While walking the Chelem Trail Chris pointed out a Northern Shrike which was cool to see as they too soon will be gone for the summer. We also saw a Double-crested Cormorant and Yellow-rumped Warblers and many Ravens as well.

At the estuary we walked all the trails and did see, Juncos, Bushtits, Hairy and Downy Woodpeckers, Red-winged Blackbirds, Steller's Jays, Northern Flickers, Greater Scaup, Green-winged Teal, Song Sparrows, Purple Finches, 2 Turkey Vultures, many Common Mergansers, Gadwall, Mallards and American Wigeon, Chestnut-backed and Black-capped Chickadees and Bald Eagles on the nest. Varied Thrushes were singing their haunting songs and many Rufous Hummers were also buzzing about. It was cool to bump into my friend Quentin as well there. We dipped on the Red-throated Loons including the poor one with the garbage all around his head and neck :(. We did see a Common Loon though.

After this we went and had lunch in Brackendale at the "Watershed Grille" on the dyke overlooking the river. Many Canada Geese were on the river but all the Eagles had gone.  We went to the dyke near the dog pound nearby and picked up a late Trumpeter Swan which was all on his lonesome but appeared healthy but it's getting late for them as most Swans in the Lower Mainland have already cleared out. Here I ran into an Irish Wolfhound a beautiful dog breed I hadn't seen in years. We also picked up Wood Ducks including a pair nesting in a tree cavity, many Ring-necked Ducks and Hooded Mergansers.

We drove up in the mountains but couldn't find a Pygmy-Owl however we did find a calling Barred Owl which was neat. The forest was alive with 2 Hutton's Vireos calling, Pacific Wrens, Brown Creepers and Varied Thrushes, Kinglets and Bushtits just to name a few.

Then we went back to the Estuary to see if we could round up anymore Bluebirds but the wind had really picked up and we couldn't see one just many Great Blue Herons and ducks.
We stopped at Zephyr's Cafe for some yummy hot chocolate and then went to Furry Creek. At Oliver's Landing at Furry Creek we saw 20 Harlequins, about 40 Barrow's Goldeneyes, Buffleheads, Common Mergansers, Harbour Seals, Robins and Spotted Towhees just to name a few.
I managed to photograph a very beautiful male American Robin and one of 2 Killdeers and some Harlequins and the light was beautiful and soft right before sunset. I met several photographers there taking advantage of the beautiful evening.

After a beautiful relaxing time there we ended the day at Porteau Cove. There we found Pelagic Cormorants and 8 Black Oystercatchers, Surf Scoters and a large raft of Barrow's Goldeneyes and 2 Red-tailed Hawks. It was a great day, so nice to see Chris Dale again and so nice to be out alone with the birds in the peace and quiet. Sea to Sky Country is a little piece of Heaven!

The next day on Easter my sister came over and we went birding at Maplewood and then we went to see the White-winged Crossbills that Kaichi Huang found the day before at #5 Rd and Westminster Hwy in Richmond. We saw 6 birds and the males and females would drink from the gutters of the roof of the fruit market. They were also busily eating the cones from the tall conifers, it was a special sight.

This has been a great winter finch year and soon it will be over as it's spring now. Usually we don't see many White-winged Crossbills at sea level but this irruption year has been an exception. It made for a special Easter watching them at such low levels today and in the presence of Floyd Cherak and young birder Katya, who were equally thrilled. I'm guessing next year we will see a Bohemian Waxwing irruption. For now though, it sure has been nice to see so many Common Redpolls, Pine Grosbeaks, Evening Grosbeaks and White-winged Crossbills... 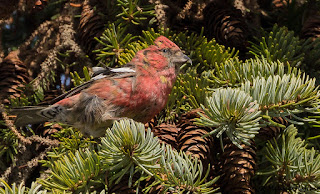