September 19, 2018
Today I went to Powell River to twitch my lifer Black-tailed Gull (BTGU).  Let me back up, this gull was first found by Ken Wright on Sept 13th but because he didn't know what it was the message got delayed reaching the public. Luckily when Ken got back from his kayak trip on Sunday Sept 16th, he eBirded it after someone identified it for him and I contacted him for details. I quickly got in touch with the local birders in Powell River, Pierre and Iwan to let them know. Pierre said he would go out in his boat immediately to check it out.

See this gull Ken found was roosting on "Major Islet," or as the locals call it "Major Rock." Ken had seen this bird while kayaking and the only way anyone could get there would be by boat. Well Pierre went out Monday morning and could not relocate the gull. I and many others were quite disappointed but Pierre didn't give up and went back out in the late afternoon. Right after 4 pm he refound the gull roosting on Major Islet. So he called me and told me the wonderful news but he was a bit frustrated that he was unable to get a photo of the gull, because he accidentally spooked them. when I spoke to him on Monday, Pierre said he would take me out on Wednesday to go look for the gull. I was so grateful! He even offered me to stay at his place. His kindness is something I won't soon forget.

Well I had to get up at 5:30 am and be out the door by 5:45 am because I wanted to get to the ferry terminal at Horseshoe Bay1 hour before departure. I couldn't miss this ferry. Well I safely made it over an hour early. The ferry left on time and I drove through Gibsons and Sechelt, all the way through Pender Harbour and past the turn off to Egmont and parked in line at the ferry terminal at Earl's Cove. While I was waiting for the 10:30 am ferry to Saltery Bay, Neil MacLeod texts me and tells me he has refound the BTGU; sitting on a government dock in Lund Habour. I couldn't believe all of our luck!. The day before a group of Albertans had rented a boat from the nice people at Terracentric Coastal Adventures for 150$ for an hour to go out and look at him. Luckily they were  successful. However, this was so much less hassle having him viewable from land. I just hoped the gull would stay put for the next 2 hours, as that is how long it would take me to get there.

I sat on the ferry quite nervous some Orcas and Humpbacks were present on this crossing and that lifted my spirits. It was so beautiful there on the Sunshine Coast but I couldn't help going to thoughts like "what if a kid starts skipping or throwing rocks in the gull's direction?"....

It has been years since I was last in Powell River. My parents used to take me camping on Texada Island, so I haven't been to Powell River since my teens. I forgot just how pretty it is especially the beaches on the First Nations reserve. Well, after a very long but pretty scenic drive (with tons of road construction) I made it to Lund. Thankfully, my GPS had brought me to the correct harbour and I could see Paul and Ivan standing there looking through their scopes; so I figured the gull must still be there. Pierre had actually called me to tell me that but since I was driving blasting jazz I didn't notice.

As soon as I said "Hi" to everyone (Pierre, Ivan and Yves) and looked at the gull's direction, it took me about 1/2 a second to pick him out of the group with my scope. He stood out like a sore thumb. A beautiful 3rd cycle gull with pale eyes, white eye arcs, a dark gray back and wings with a mottled gray head and chest and his diagnostic white rump and black tail band was beaming back at me. Not to mention his beautiful yellow bill with black ring and red tip! I couldn't get over how stunning he was. This bird is listed as an ABA Code 4 bird. 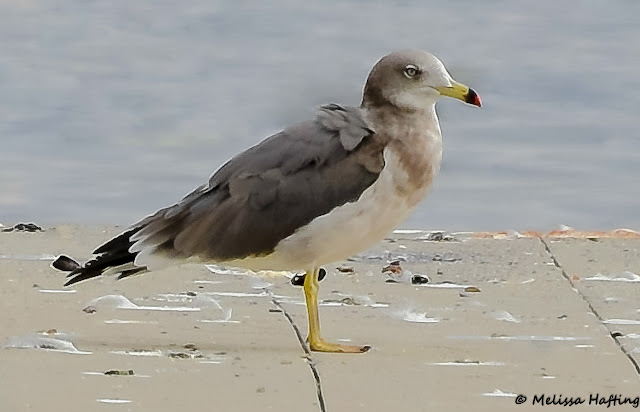 I can't tell you how long I have wanted to see this gull. It is right behind Ross's and Ivory Gull for me. I love these Asiatic gulls and funny enough, Mike Toochin and Peter Lypkie found a Slaty-backed Gull in Delta in the same week as this BTGU! Crazy to have 2 Asiatic gulls in the same week in the provine! Really this September has been one fantastic month of rarity birding in BC! I mean Little Stint, Snowy Plover, Arctic Tern, Red Phalarope and last night we found a rare subspecies of Song Sparrow called montana.

Ivan was really sweet and bought me lunch out of the blue and I stood eating it while watching the gull. What a nice community of birders Powell River has. Back to the gull....he would walk around and pick at the ground and then sit and tuck his head in and sleep for a bit. Later he would teeter on the dock before jumping off and doing a small flight showing those diagnostic field marks. He had a quick swim and was back on the dock roosting and preening again.

I have to say the dock covered in gull poo and many other gulls did not make for the most pleasing background. I was hoping he would stay on the water, so we could take Pierre's boat out to him but he wasn't having that. He just wanted to roost on the dock.

The people who saw him on the rock definitely got better photo opportunities than I did. You could see him with bins where I was but since the dock was across from the one I was standing on, the best views were had by scope. I did get some record shots and did a heavy crop to isolate this pretty gull. It was a nice twitch and a solo twitch. I haven't been on a solo twitch for so long and it was nice to be alone with my thoughts and with nature. I saw one black bear on my way home, which was a beautiful sight. I tried my luck and stopped at Wilson Creek Estuary in Sechelt to see if I could magically relocate the Lark Bunting (another bird I need) but no dice. I noticed someone had put up a feeder perhaps as a ploy to entice it or another rare bird. I ended up getting home before 8 pm, and it was one very long and tiring day (I was exhausted) but one I won't soon forget!

This Black-tailed Gull, is the third confirmed photo-documented record, for the province of BC so it is exceptionally rare. I sure am glad I went today because I had nice sunny and partly cloudy weather. It was also relatively warm but the next few days look miserable, wet and cold. I wonder where the gull will turn up next, for everyone's sake, I hope he keeps to the dock. My friend Blair always said if you don't follow the "Go Now Rule" you have no right to complain and that is my motto too! Go as fast as you can, as soon as you hear a rare bird is there and if you don't, you can't complain that you missed it.