September 04, 2018
Well Ilya came back from being in the field for work and I rallied friends together the Toochins and Kevin Louth to go Little Stint hunting at Boundary Bay. We ran into my friend John Vooys on the flats and we all began searching. My other friend Dave Beeke was down at 88th St hunting hard for the Snowy Plover I had seen the day before. Ilya still needs Snowy Plover for BC so he was greatful. We met up with my friend Rob Lyske at 104th St who was with Steve Ansell, Doug Bamford and many other birders from WA and BC. They had a Pacific Golden-Plover before we arrived but we could not see a single Black-bellied Plover. Nor the Willet or Ruddy Turnstones but there was several large flocks of Western Sandpipers. As we got closer to them a Peregrine Falcon came and flushed the flock. Then as we got closer to Steve Ansell he shouted I have the Stint! We congratulated him and got on the bird quickly. Everyone in our now group of 12 got on the Little Stint. It was a lifer for John Vooys and he high-fived me. I double checked with everyone if they got on it and we all had. The stint stayed near us almost right up at our feet as they fed clear then they would pick up and move a little backwards and we would have to refind him again but we had him present for at least 30 mins allowing for great views. These views were much better than the first day I saw him on Saturday.

Here are some photos Ilya Povalyaev got of the bird. He has a 500mm lens so he has more reach and since it was a lifer for me I much rather have concentrated on looking at it than photographing it. However I did get some shots but they aren't half as good. 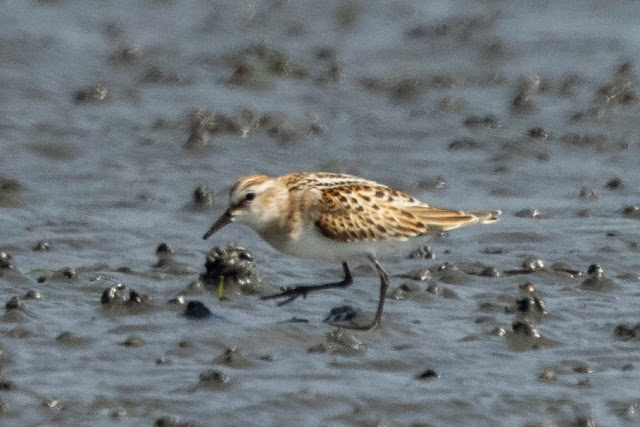 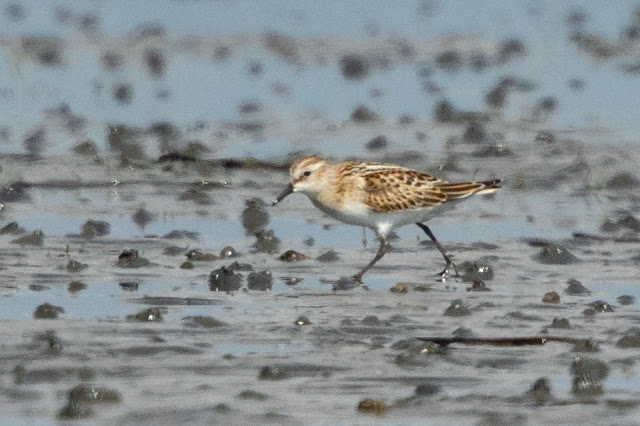 I couldn't help admiring in this perfect light just how beautiful a juvenile Little Stint is. I think I definitely prefer them to Red-necked Stints. Juvenile Little Stints are so bright and golden and those dramatic back v white braces really are something to behold. The cute tiny bill and dark central feathers and scapular appearance really make it such a dainty pretty shorebird. Snowy Plovers are probably one of my favourite shorebirds too and seeing that little cutie on Saturday was special it's just a bird that I never tire of seeing but my highlight this weekend was definitely the Little Stint.

On the way out we had 7 Buff-breasted Sandpipers in a dirt field at 96th St.


After this we chatted with Dave Beeke who returned my Alaska guide and talked about his incredible find in St. Paul Island which was a beautiful Common Ringed Plover. We then all went to Iona where Ilya biked the jetty and I stayed in the inner ponds since my feet were just too sore. Ilya got the Arctic Tern a Vancouver bird for him and when he was done he let a WA birder use his bike to get the Arctic Tern as well who was super grateful. It's a long 8 km round trip and everyone is tired after being on the mudflats as he was with us earlier. Dave Beeke and Carlo Giovanella and John Vooys and John Reynols and many others were smart and brought bikes out to go get the Arctic Tern. I'm so surprised it is sticking so long and it is still present today. Sadly the Little Stint has not been relocated today and 4 days is typical for the length of time for a Stint to stay. After our sighting around 11:30 am no one saw the Stint on Monday evening. Hope he can be relocated as I know a few from WA drove up and left before Steve had refound it. Also many of my young birders went out too late for him and missed him. I REALLY hope they can refind it but now they are back at school. Oh well I hope to get them something good on our pelagic this weekend!

Well I was sad Ilya was away for so many great birds in Vancouver but in the end he just ended up missing a Snowy Plover and one is in Revelstoke now and I've already seen 2 in BC and there has been 2 this year at Boundary Bay this year, so I'm sure there is more to come.

I can't remember such a great long weekend on any labour day in BC in recent history.