Since December 2017 I have made a goal for myself to get a decent Barrow's Goldeneye photo. I have gone to several places in the Lower Mainland to photograph them. I have never got the photos I desired they never came close enough or the light was wrong and they were close and in shade... or close but the sun was in the wrong position for photography.

Yesterday, on my day off, I went to Lions Bay in West Vancouver and found a raft of over 100 birds. I walked on the beach and they swam far out as predicted. I had brought a yoga and beach mat and lay down on it with my radio and lunch and just waited. Eventually they swam right in front of me to feed on mussels. They didn't even care I was there I was perfectly still. My arm started to ache after a few hours and my neck pained. A few Buffleheads, Green-winged Teals and Surf Scoters were in  the large raft as well.

You know how everyone talks about getting "warbler neck" ? No one ever talks about "duck neck" and I had a serious case of it. I think I will have to book a massage soon but it was all worth it to get this close to one of if not my favorite duck!

They were doing there head cocks and mating displays literally a few arm lengths away. Some males successfully bred with the females too. The males showed their white belly as they groomed. I also saw some immature males that were interesting with their brown faces and brown heads like the females but when they got close you saw the blue feathers coming in.

At some point these guys got too close to my lens but I couldn't move back on my mat or I would have flushed the whole flock.

Since, these guys will soon be off to their breeding grounds I was so happy to be finally successful in achieving my goal.

It was so awesome on such a gorgeous day.

To see a video of the Barrow's Goldeneyes feeding right in front of me see below: 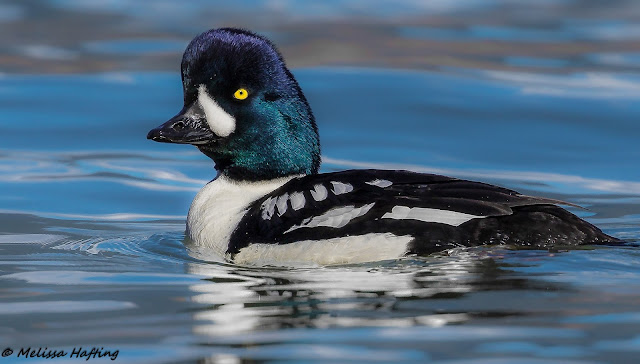