November 20, 2017
I went up to Penticton yesterday after my friend Chris Charlesworth and another birder Jesse Hannebauer found a Little Gull. This is a bird I have wanted to see in BC for a long time. It is the smallest gull in the world. I just love the Hooded Gulls. I was out of town the last time 2 showed up in the Vancouver area in 2012. I also missed the one in Nakusp in 2014. Therefore, I decided to travel the 4.5 hours to Penticton for this lifer. I was expecting some snow through the mountain passes but it was like summer up there! Not a drop of snow on the road. In the Okanagan there wasn't any snow at all! I have driven here in years past, at the same time in November and had so much snow and needed a 4 wheel drive, so it was a welcome treat. The drive was sunny and warm for the season, about 5 degrees Celsius. Black-billed Magpies started as soon as I got into Princeton. I made it in great time and saw Michelle Lamberson and her husband and young birder Kalin Ocana there. He told me he wanted to join the young birder program,which was great. Can't believe I haven't met him before. How many more amazing young birders are out there that I don't know know about? Probably very many. He told me he went to Baffin Island to bird with his aunt. He really impressed me with his vast knowledge of Little Gulls. He had found an American Dipper that he pointed out to the group, which now consisted of Joachim Betrands and Daniele Mitchell who came over after looking at some Herring Gulls. Jim Turnbull also showed up and I got him onto the Gull. There was a large raft of Gulls, Redheads and Scaup. There was also Common Loons, Trumpeter Swans, Common Goldeneyes and Common Mergansers and a Red-necked Grebe on the water and many gulls. The beautiful Red-necked and Goldeneyes were right in front of us but were sadly not paid much attention to. Normally this would be an opportunity one wouldn't pass up, but that Little Gull drew all of our attention.

The Little Gull was very easy to pick out with its small size, distinctive back M-wing pattern and it's rapid flight, turns and dives that it made constantly. He was expanding so much energy as he flew so fast around the lake. He would travel great distances (few kms) and then return to the pier with his
distinctive rolls and dives in flight. He very much reminded me of watching all the Arctic and Aleutians Terns in Nome that were flying and diving frantically around. The Little Gull never dove into the water like the Terns, he more skimmed the surface of the water. He was so dainty and cute. It was really cool to watch. You could see him very well with a scope, I was glad I brought it. I got some distant record shots as he was about 150m off shore. Note the distinctive "M" pattern on the back and wings of this immature Eurasian Gull. This was bc Bird # 413 for me. 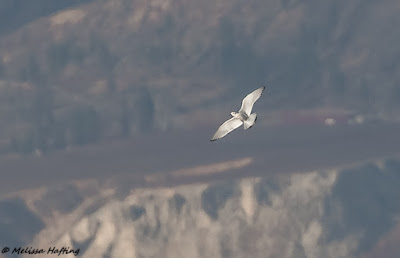 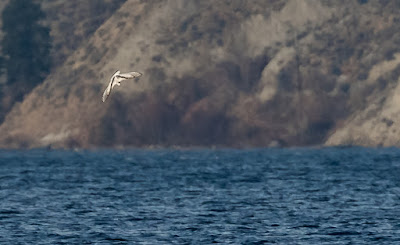 On the way up I had a Gyrfalcon flying over the highway, which you don't see too often and a large covey of 50 California Quail. After looking at the Gull for a few hours trying to get some decent shots, which I never truly got and chatting with others, I decided to head to the "Throne". This is the name that local birders give to the Haynes Ecological Area in Osoyoos. In the summer you often get a lot of ticks on you in there and have to look out for rattlesnakes but not at this time of year (too cold). I went here because Chris Charlesworth had found many good birds there the day before. He had a Rock Wren, Gray Partridge, Chukar and Canyon Wren. It is a known spot for the wrens but the Rock Wren was late, as they usually depart for the winter. I quickly got those birds and it was cool to see how happy Joachim (a Belgian birder) was when he got his lifer Canyon and Rock Wrens. I told him that most BC birders wait a long time for a nice visual of a Canyon Wren like that! He had 2 bobbing up and down and calling in front of him. Canyon Wrens really are beautiful birds and I love the shows, they put on.

Later I got to see a Rough-legged Hawk and enjoyed listening to the noisy Chukars as they climbed along the cliff faces.  Grey Partridge were flushed and were also calling. It is not easy to get Gray Partridge up there, so that was cool. I still don't have the award winning shot I am hoping for of that species in BC yet! haha. I don't know why they are so shy here compared to Saskatchewan. A few deer passed by as well.

I  randomly looked quietly and briefly into a nest box (without opening it) and found 5 adults Western Bluebirds roosting together! This is a communal roost that I have only seen being done with Pacific and House Wrens. I looked this up when I got home and found that it is quite common with Eastern and Western Bluebirds. Up to 20 birds have been observed in a box, some unfortunately suffocating to death. They apparently fan their heads out, so that they all can breathe. You can see at least one doing it in the below image. The winter nights get cold up there, so huddling together provides much needed body heat. Some winters many bluebirds can die so conserving energy and heat is paramount. Bluebirds are tolerant of people and their nestboxes are checked and monitored regularly. This shot was taken in an even less invasive method, without lifting the lid of the box up. It is never good to disturb roosts or nesting birds. The phone was slid through a narrow slit opening at the top of the box for a quick shot and was quickly removed out again to document this rare (for me) occurrence. The birds did not flush, nor were disturbed and never saw a human with this method.  I talked to Chris Charlesworth and Mike Force, who live and bird in the Okanagan extensively, and they hadn't seen it before. I am constantly taken aback by the beauty of Western Bluebirds.


In the evening as darkness descended over the valley Coyotes began howling. It was so nice to be in nature like this, away from the big city. I ended up covered in about ten large spined Cactuses clinging to my shoes and pants but boy was it worth it :).

Another great twitch and day in the Okanagan. Congrats again to Chris and Jesse on finding this bird. It is the first record of this species in the Okanagan and the 98th record for the province.