October 31, 2017
Today I finally had time to do some local birding. I went to Brydon Lagoon in Langley to see the Clay-colored Sparrow that was present for 2 days and found by Cos van Wermeskerken. I was also hoping to see the White-winged Crossbills seen the day before. I found it funny that at Reifel a day before there was a Clay-coloured Sparrow followed by a flock of White-winged Crossbills!

I ended up dipping on both in Langley but it was not a wasted trip! As soon as I got to the lagoon on this gorgeous sunny Halloween day I saw 2 Cackling Geese one appeared to be Minima and one Travener's.The differences were quite noticeable one with a stubby short neck and small body and another larger bird looking more like a mini Canada Goose. 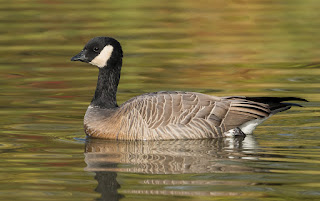 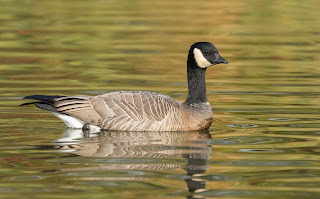 They were the odd couple but a pleasure to photograph as I don't get too close to them normally. There are quite a few around town right now at Burnaby Lake and Reifel as well. As I was shooting these Cacklers a Pied-billed Grebe swam right towards me and then another appeared and another! I have no good Pied-billed Grebe shots even though they are quite common. It was fun watching the little grebes dive for food so close to me. 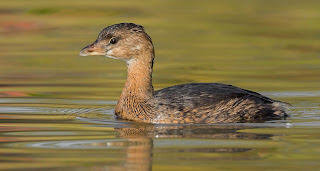 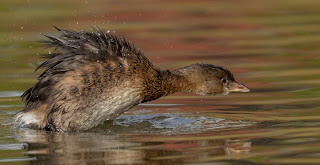 As I was searching for the sparrow after saying goodbye to a few birders who looked unsuccessfully this morning I walked around the whole lagoon saw some Hooded and Common Mergansers and then looked up and saw an adult stunning Northern Goshawk fly overhead. I totally was not expecting it and by the time I had lifted my camera it had gone.

After this I went to Boundary Bay to see if I could relocate Ilya's Willet that he had found on Sunday. I had seen the Willet in September but no one had seen it for months. It probably is a different bird since it has virtually been seen by no one for so long but again it is a big bay! It would be cool if it overwintered. We used to have Willets annually in Vancouver. The last one was in White Rock and departed in 2014 and before that we had one in Tsawwassen for years. Now we are spoiled and it's very rare to see a Willet in Vancouver, so this year was really cool.

There were thousands of Dunlin out there and hundreds of Black-bellied Plovers mixed in with thousands of ducks at high tide. It was so cool to watch the Dunlin do over-ocean flocking. There was a guy from City TV filming this phenomenon actually as well. I checked out 104th St for a long time and nada no sign of any late Sharp-tailed Sandpipers either. I went down to 96th St and I saw my friend Mike Tabak with the City TV news guy funny I was trying to make the tunnel and chatted with Tabak but forgot to ask him what the news guy was doing.

It was nice to see the Bald Eagles back at the bay. Man they are truly stunning birds. I really have missed seeing them in numbers. This year I plan to shoot them a lot as they catch salmon in various areas of the province. In the drive in I had seen a few Short-eareds hunting alongside their enemies the Northern Harriers. Speaking of Owls the strangest thing happened yesterday as I had the window open a Barn Owl flew right by my window! Now that doesn't happen every day.

Since Mike told me he searched for the King Eider today and didn't find it I decided to definitely get through that tunnel by 3pm and go to Iona just as I was going my friend Tom Plath texted me. He had a Mountain Chickadee in his yard! This is a rare bird for Vancouver but this year maybe due to the wildfires or heavy snowy fall causing lower elevation dispersal there are several Mountain Chickadees in the lower mainland. This month alone there has been one in Langley, Coquitlam, Surrey and now Richmond. Last month one was reported in West Vancouver. Crazy but a delight all the same!

Well it was fun chatting with Tom who has graciously opened his house to the public until Thursday when he leaves for Argentina. The bird was really tame and sat on the feeder and ate right in front of me he came and went fast but always came back every few minutes. The yard was really birding with bushtits, Black-capped and the one Mountain, American Goldfinches and House Finches.


After this, I stopped at home to get my dogs and go for a walk at Iona. I walked Shannon Road looking for some Common Redpolls which seem to be popping up everywhere so far along with White-winged Crossbills.It's definitely going to be a good finch year... come on Pine Grosbeaks! But no luck for me.

I proceeded onwards to Iona and I started to photograph some Snow Geese that came right up against the causeway. Just when I began to do this, s guy who works for YVR drives up walks out and just blasts a gun right by my dog and the dog bolted it could have got hit by a car or worse took a while to calm her down. I told him off I was so upset so was Mario who I ran into. The birds were so far from the airport just resting minding their own business and he saw I was photographing them and he saw there was a dog there. The least he could do was warn us he was going to shoot the flare gun so we weren't startled like that.  Poor birds I understand scaring them off the runway but Snow Geese hugging the causeway aren't bugging any planes.

Anyways, after that walked the dog along the pipe and a Sharpie flew across the road and about 5 mins later a Cooper's Hawk flew the other direction! Crazy how many Accipiters I saw in one day. I continued walking down the pipe to take a look at the sewage lagoons. I couldn't bring the dogs in so just planned to look through the fence I noticed the long-billed dowitchers, killdeer and ducks, nothing much of note and then I heard the familiar metallic sounding call of a Swamp Sparrow. I say familiar because they were very common where I used to live in the Prairies. We get a few every year in Vancouver they are still fairly uncommon. I pished and immediately it popped up and looked at me and remarkably it stayed on a branch long enough for a record shot. These guys are notoriously skulky and you mostly hear them and don't see them. He was at the south end of the SE inner pond. Pretty nice for just peering through the fence.


A nice way to end a day that started in failure.