October 18, 2017
On Tuesday, I went for a walk in one of my favourite places, Beaver Lake in Stanley Park which is located in Vancouver. I love going here to feed the birds and enjoy the beauty of the place. I have been coming here since I was a little girl. My dad would take me here to feed the chickadees. I have got all sorts of birds to eat from my hand here, including a Song Sparrow.

Tues was no different. It was a gorgeous sunny day and going there just makes me happy. When I'm looking at, interacting with and feeding the birds I just feel at peace and lucky to be alive. The little Chickadees (both Black-capped and Chestnut-backed) surround me, land on my head, hands, shoulders and even camera and legs. Having a Chestnut-backed land on your hand is always so cute, they really are much lighter than the chubbier Black-cappeds but both have their unique charms. Chestnuts may be a little cuter to me, since I see them less where I live.

Here is one I photographed that day. The fall colours of the leaves all around it expressed the joy they brought me and bring wherever they go.

Some of the happiest moments of my life were spent with Chickadees.


As I fed them, squirrels came to join in, as did the Steller's Jays squawking, a Varied Thrush, multiple Spotted Towhees, Fox Sparrows and Song Sparrows also came to the tasty treats. A Pileated Woodpecker called and a Common Raven and Bald Eagle flew over.


A few Pacific Wrens came to check out the action as well. I felt like Sleeping Beauty in that scene where she sings and dances with all the animals in the forest. See below if you want to watch that scene from the Disney Film. This was always my favourite Disney Film growing up.

Well, as I continued to walk around the little lake, the birds followed flying at me before I could even get seed out of my bag. One Chestnut-backed Chickadee sat on my shoulder for quite some time and took a small stroll with me. Ruby-crowned and Golden-crowned Kinglets sang in the trees above and more Towhees at my feet. Yes, it was Heaven.


I went into the woods to visit 3 Red-breasted Sapsuckers and a Brown Creeper, as I like to do each time I go. I then continued on with more Chickadees in tow, until I got to the lake and began to turn my attention to the wood ducks whom I started to feed. As I fed the ducks, I noted a Belted Kingfisher squawking. I stopped feeding the ducks and looked skyward and saw a Cooper's Hawk trying to attack the Kingfisher!. He was chasing the Belted Kingfisher all around the lake! I had never seen that before. A Kingfisher is a sturdy medium sized bird, Cooper's Hawks usually go after small songbirds and sparrows. Well not this Cooper's Hawk, he was brave!

After an exhaustive fly around, where at one point the Cooper's Hawk almost nailed his talons into the kingfisher, the bird flipped and outmaneuvered the hawk. The Kingfisher retreated to one tree and the Cooper's Hawk to another. I breathed a sigh of relief and continued to watch them, to see what would happen next. All of a sudden the hawk flew at the Kingfisher again and they were at it once more. After this round the Kingfisher and the Hawk landed in opposing trees. Well, within a few seconds the Kingfisher turned around and flew straight at the hawk, scolding and pestering him. The Kingfisher was smart and now above the perched hawk and there wasn't much the hawk could do but sit there and not enjoy it. He finally decided this was just not a meal worth having, as the crazy Kingfisher who I thought would get himself killed continued on. The hawk must have said "enough with this Kingfisher, with the mouth on him he probably doesn't taste good anyway!" and he flew away into the woods in search of an easier meal.

It was a cool thing to witness. I admired the strength of the Kingfisher and it made me think about life. Even when life seems hopeless or you feel you have no options left and are the underdog, to keep fighting and to not give up. If I ever feel down or beaten down as we all do sometimes,  I will think of this little Kingfisher who beat the odds that day.

Seeing how narrowly that Kingfisher missed death today made me reiterate what I already knew that life really is a special gift.  We are so blessed and each day that we get to spend outside with the birds is special. Everyone always says to me that I am such a big twitcher, which I am; but if I was never able to twitch another rarity again, I would be content enough to sit with my chickadees. It's the little things in life that we take for granted that matter most.

I truly feel that it's vital to make the most out of life, hug your loved ones and keep them close and let them know how much you care. That's what really matters not the trivial things but that you live every day until the fullest with no fear as this brave kingfisher showed me.

Since I wasn't able to get any photos of the Kingfisher and the Hawk, I will post 2 photos of  a male and female Belted Kingfisher, that I have taken in the past. I admire the Belted Kingfisher species even more now. Kingfishers are definitely one of my favourite bird species. Seeing the Green and Ringed Kingfishers in Texas this year, was a definite trip highlight (and they weren't easy to find!).


Beaver Lake is a place I will always treasure, I've learned so much there about wildlife and birds from young and still do. We can learn so much from the birds if we are just willing to listen as the Kingfisher showed me on Tuesday. Below are some photos from last winter's visit to Beaver Lake; since they are happy memories I thought I would share them. 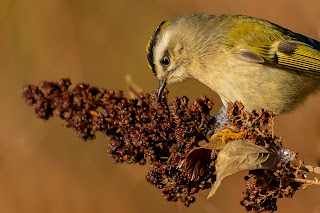