Twitching one BC bird but finding another (a SNOWY PLOVER)!

June 18, 2016
I went with friends Peter Candido and Kevin Neill to Ucluelet,BC to twitch a White-winged Dove that Ian Cruickshank had found the day before. The bird was coming to a feeder so we were hopeful that these notorious (one day wonders) would actually stick this time. Well we got there after the 3 hour drive from Nanaimo and were dissapointed after hours of standing upright waiting for the dove to fly in. Every time a Eurasian Collared-Dove flew in we almost had a mini stroke! Well we were just about to give up and make the 3 hour drive back to Nanaimo so we could catch the evening ferry to Vancouver defeated. However!!, Ian Cruickshank called me and said Mel I have a Snowy Plover right in front of me. He must have gave me directions but I don't think I listened too well. I mumbled we were coming and Peter and Kevin were already running to the car. Well apparently this place was only 15 mins down the road... we ended up driving right past the place Ian was and went straight to Tofino! It was about a 30 min delay each way!! We had no cell service to contact Ian and I was feeling pretty bad I had not stored any of this info in my brain. I was too excited obviously! Peter Candido was driving my car and turned it around and we finally came upon Ian's car. We ran down the 1 km trail as it began to drizzle and then came to a stop as we had to clamor down a muddly slope using a rope to get to the beach. We looked around and couldn't find Ian and then I spotted him across a tidal channel. We waded in lifting our camera gear high and Ian was with his parents and the cute puffball Snowy Plover who was oblivious to our presence. We all made sure to stay well back as to not flush it. Later that evening Daniele Mitchell (who was doing a BC Big Year) successfully twitched the bird. It was never seen again after that. When we all calmed down Ian let me know he told me on the phone that this place was called Florencia Bay ... sigh :)

I know no one who ever went for one BC bird twitch and found a new BC bird instead! This bird was a new BC and Canada bird for all 3 of us! What are the chances?

I think Ian's good luck rubbed off on us. He was on fire at that time (as he always is, he is an exceptional birder) as he had found  3 BC provincial rarities in 1 week! They were a Northern Parula a few days before the White-winged Dove and now this Snowy Plover. 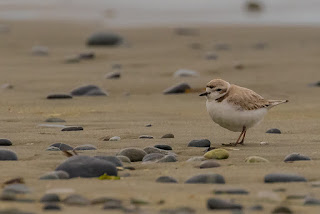