May 28, 2017
Ilya said he wanted to take me to Manning Park because he knows it is one of my favourite places to bird in BC. I am actually going to lead a Young Birder's Trip there in a month. Anyways Ilya and I were pleasantly surprised with how warm it was but half of Lightning Lake trail and all of Strawberry Flats trail was covered in snow. We went to Lightning Lake first where we saw a Snowshoe Hare, Columbian Ground Squirrels and Chipmunks. We then saw Barrow's Goldeneyes, tons of Townsend's, Wilson's and Yellow Warblers (none would pose for a photo), Interior subspecies of Steller's Jay, Warbling Vireos, Dark-eyed Juncos, Kinglets, Nuthatches, Spotted Sandpiper, Common Mergansers, Chestnut-backed and Mountain Chickadees. We watched an Osprey grab a fish. I had never seen an Osprey there before so it was cool.

After walking around the whole lake, we went to Strawberry Flats. Here we were bombared with cute Gray Jays who eagerly wanted my peanuts. We fed them and took some photos and suddenly heard the call of a sapsucker. We looked up and saw that it was a male Red-naped Sapsucker. Both Red-breasted and Red-naped occur in the park. This is supposedly true of Sooty and Dusky Grouse as well. Manning Park is on the transition zone between the interior and fraser valley. On the trail we saw many Varied, Hermit and a few Swainson's Thrushes. We heard several Pileated Woodpeckers calling their distinctive calls. Red-breasted nuthatches and Mountain Chickadees were on the trail but we could not see an American Three-toed Woodpecker. Last year when we were there we couldn't stop seeing them all over the park. This time we ended up sadly not seeing one. I find it can be this way at Manning Park that you aren't always successful with these guys.

I go to Manning Park alone and with friends a lot and know the place like the back of my hand and I have been there so many times just to get a decent photograph of a Three-toed Woodpecker. They are my favorite woodpecker in BC. Mike Ashbee came with me on one such endeavour and he really helped me on how to set up and compose my shots using the willing Gray Jays.

I still did not get my shot with him though.

I finally got that ideal photo in a huge snowdrift with my friend Mike Tabak back in March 2015. I literally had snow up to my waist when I took this photo! haha

Back to present day after a nice 2 hour walk in Strawberry Flats we decided to head to the Lodge to look at the hummer feeders. Well the Lodge had been full expanded since the last year I was there and all feeders had been taken down. I will see if they are back up when I take the kids in a few weeks. We were disappointed but soon that changed when Clark's Nutcrackers flew in. I adore these birds and I began feeding them and they perched on my hand. I took several photos of them and then a Common Raven and a coastal subspecies Steller's Jay. Columbian Ground Squirrels were running at me from all directions some were eating grubs and others were demanding nuts. We remarked how lucky they were not to be in an area full of Grizzly Bears as Grizzlies love to dig up and eat these guys.

After having some fun here we went in to get an ice cream since when we came in we had sadly noted that the road to Cascade Lookout was still closed. Well the cashier was commenting on our long lenses and asked us if we had gone up the Lookout. We said no "it was closed today sadly" and she said "well you are in luck it just opened an hour ago!." We both love the lookout so headed up there and were not disappointed.

We had gorgeous views of the Cascade Lookout and had Cassin's Finches, Cassin's Vireo, Common Ravens, Hermit Thrushes and a beautiful Male Sooty Grouse. The road to alpine meadows was still snowed in. At the lookout we fed nutcrackers who came to  my hand. I gave a guy who looked envious some peanuts and he was thrilled when the birds came on him. We also fed some Golden-mantled Ground Squirrels and watched one sun himself. Chipmunks were also abundant up here and Chipping Sparrows. 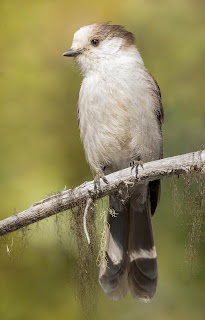 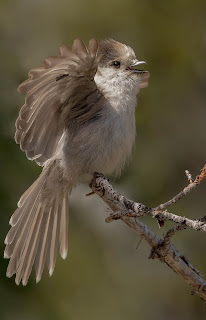