A Day with a Loon and Rusty Blackbird

On Saturday after looking at two Say's Phoebes at the same time in Vancouver (which we have never seen before as they usually come through solitary) we decided to head down to Washington to photograph Long-tailed Ducks and Eared Grebes which had been hanging around Blaine Harbor for months. As we were crossing the border and told the Border Guard where we were going and what we were doing. He asked me what my favourite bird was and I proceeded to tell him it was a Rough-Legged Hawk. He then asked for the Latin name of the bird and I had no idea. I told him I honestly don't know and he remarked it probably wasn't your favorite bird and laughed and said have a good trip. After we were on the highway I asked Ilya if he knew the latin name of the bird and he said. I said what why didn't you tell me/him?!!. He said I didn't want to look like a geek... Guess Ilya liked seeing me squirm.


Of course when we got there the Long-tailed Ducks were way out with their other beautiful buddies the Harlequins. We spotted two Eared Grebes and they came right near to shore but always in harsh light so I decided to just look at them. Rarely do we get to see them so up close and personal in the lower mainland. The horned Grebes and lesser scaup hugged closely to us as well along with a very cute Pied-billed Grebe. Red-breasted Mergansers and Olympic and Glaucous-winged Gulls and beautiful breeding Pelagic Cormorants were also close by on the breakwater. Since the light was not good and our targets not cooperating we decided to head 20 mins up the road to Fred Myer in Bellingham about 4 days earlier Noah Sanday spotted this bird after some grocery shopping. It was admittedly bizarre walking around the store parking lot with bins and long lenses checking under cars and every Brewer's Blackbird that walked by. People looked at us like what the hell are you doing? Some probably thought we were casing the joint. After about 30 mins walking around the parking lot I said ok one more time and then we will go well on our way back to the car defeated a lady was standing with her husband with binoculars staring at something. I slowly walked up and saw literally two feet from our car a salt lick and the birds including our Rusty feeding on it. This bird was first labelled as a male but when we saw her we could clearly see the grey rump and way too much Rufous on the flanks and back. We got some photos and I notified by friend Ryan Merrill that it was actually a girl. I have never got this close to a Rusty Blackbird so it was a real treat. Usually you see them distantly through a scope if you are lucky. These birds are severely threatened and rapidly declining in North America due to loss of habitat on their wintering grounds in the US and lawful Blackbird control (in my opinion Rustys should be exempt). Anyways let's hope we don't lose them for good. After this the evening light was gorgeous so we drove back to Blaine. On the way there I spotted an all white (leucistic) Red-tailed Hawk. Some have been living in the area for many years but I rarely see them so it was a treat. Back at the dock the Long-tailed Ducks still were camera shy but as we decided to just sit in the good light direction and see what comes to us we were handsomely rewarded. A breeding plumaged Common Loon came by it was magnificent and we were surprised to see one in full breeding at this time. We watched it fish for crabs and swim right towards us it was spectacular. We fired off many shots and as it swam repeatedly at me I kept saying wow! It was a magic moment you never tire of these events. After a thoroughly great day we decided to come back here tomorrow and focus all our efforts on the Common Loon. Bright and early we crossed the border no line up I guess Canadians don't want to visit Trumplandia ;) but really I'm sure it's the insane high dollar. A real good time financially for us to be going to Texas and Nome sigh LOL. On Sunday morning the Loon flipped the table on us not only did it come close enough to touch but another Common Loon came swimming right at us from another direction. It was hormonal and began fighting with the other male. At one point it pulled the other Loon under and dragged it across the water as the above Loon frantically tried to flap his wings and fly but couldn't. Nature can be cruel. All is well that ends well though because they seem to make up pretty quickly when the other Loon discovered there was more than enough crab to go around. They began vocalizing to each other that wailing, haunting and iconic call we all love so much. I can't get enough of it. Then one began preening and gave me a series of wing flaps and stretches that made my day. I have had great experiences with Loons. On the nest and with chicks riding on their backs in the interior but never captured one in breeding plumaged down in the lower mainland so close and never captured the magnificent wing stretches and flapping which show off their patterns so beautifully. A few friends from Seattle joined me up there to get some good Eared Grebe views and they too were mesmerized by the haunting beauty of the Loons. It was a great day in the Pacific Northwest with one of my fave birds and my fave people.

I've said it before and I'll say it again There is nothing "common" about a Common Loon. 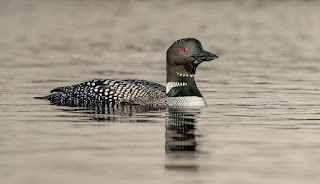 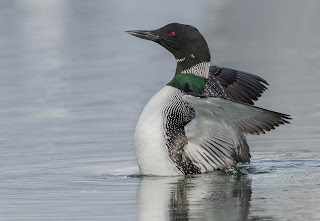 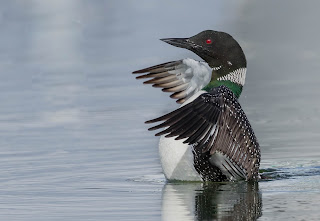 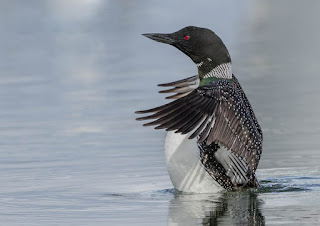 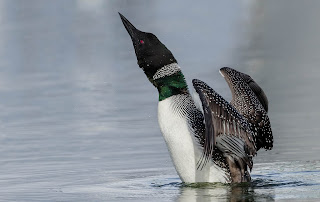 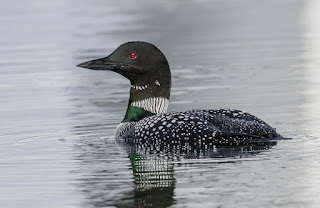