Showing posts from February, 2018
Show all

Ever seen a yellow Cardinal?

February 28, 2018
We have a Northern Cardinal in BC right now and that's weird enough, but imagine seeing this ONE at your feeder!

EYE COLOUR - YELLOW OR ORANGE? RED? Normally a juvenile Cooper's hawk has a bright yellow eye and a Juvie Sharpie has a orange eye but some cooper's can have a dull yellow eye that looks a bit orangish. Cooper's Hawks usually only transition to the orange eye colour when they are sub adults, so in good light, it's a very very reliable feature. However you can't rel…
22 comments
Read more

February 26, 2018
A few months ago I posted an article about all the owls dying in Metro Van due to rat poison after a Pygmy Owl tested positive in North Van near Maplewood Bird Sanctuary and a few days ago a dead Northern Saw-Whet Owl seen behaving strangely the day before before at the same location. It is being tested but most likely it died from rat poison. Unbelievably, right beside a bird sanctuary Maplewood Flats owned by the Wild Birds Trust the federal government building has rat trap boxes with poison all around it! Maplewood has Barred and Great Horneds there too. Several birders have written letters to their MPs, MLAs and Mayors as laws need to change. This is a problem all over cities but especially in North America. Is a cruel and slow way for both the rat and the owl to die. It makes the rat and mice walk around more lethargically which makes it easy pickings for an owl. Hence why so many owls died. I know a Barred Owl pair that I watch frequently 90% of their diet are large sewer rats.…
2 comments
Read more

February 21, 2018
The Government of Canada has launched consultations regarding the potential to amend Schedule 1 of the Species at Risk Act (SARA). These consultations seek the public’s input into the federal Minister of the Environment’s response to assessments of species at risk submitted by the Committee on the Status of Endangered Wildlife in Canada (COSEWIC).

In British Columbia there are 7 terrestrial species for which COSEWIC’s assessments could lead to amendments to SARA Schedule 1 (the List of Wildlife Species at Risk) including these birds:

-Evening Grosbeaks have exhibited significant long-term declines (77-90%) over most of its range, since 1970.
Over the past decades, some data suggest a further decline of nearly 40%. Threats to the species
include reduced availability of mature and old-growth mixed wood and conifer forests, collisions with windows, and mortality associated with feeding on grit an…
Post a Comment
Read more

February 21, 2018
You probably have heard about the Port of Vancouver's proposed expansion. I have sent out many petitions for friends to sign and posted about it here as well. Well today Environment Canada put out a statement which hopefully puts a nail in the coffin to the expansion and the decimation of important migratory bird habitat.

"Environment officials have struck a potential death blow to the Port of Vancouver’s $2-billion container expansion in South Delta, saying the risks to a significant migratory population of western sandpipers are simply too great for the project to proceed.

A written response from Environment and Climate Change Canada to the Canadian Environment Assessment Agency (CEAA) describes the predicted impact of the Roberts Bank Terminal 2 Project on hundreds of thousands of sandpipers as “potentially high in magnitude, permanent, irreversible, and, continuous.” 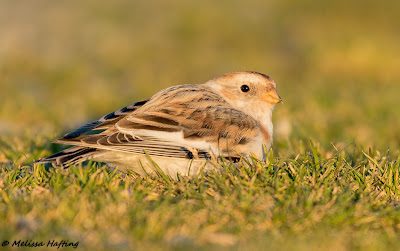 This evening I took my dogs for a walk along Iona's South Jetty. The sun was out and it was a beautiful evening. I purposefully went late in the afternoon just before sunset, so that very few people would be on the jetty. It had snowed the night before and it was pretty out there. I found the Snow Bunting at Marker 125. I told my dogs to lay down and they watched me as I lay sprawled out on the jetty shooting shots of this little beauty. My dogs don't chase birds since I've trained them since puppies and they sat quietly looking at us. The bunting let me literally walk right up to it. He then started walking towards me and he became too close so that I couldn't take photos and had to back up. They sure are little cuties. He was very much at home in the cold air and tiny bit of snow on the ground.

Congratulations to Adam Dhalla who won the 2018 ABA Young Birder of the Year Award! 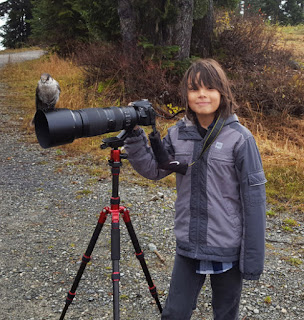 12 year old young birder Adam Dhalla from Coquitlam, who is in my BCFO Young birder program won the ABA Young Birder of the Year Award for 2018 for ages 11-13!

You can read all about it HERE!
(Check back at the link above in the coming weeks for his interview and award winning submissions)

What an amazing accomplishment! I am so proud of you Adam!

Also if you missed my earlier post about this: 17 year old Young Birder Liron Gertsman was the featured photographer this month for the Bristish Columbia Field Ornithologists Association and you can read about it and view his photos HERE. 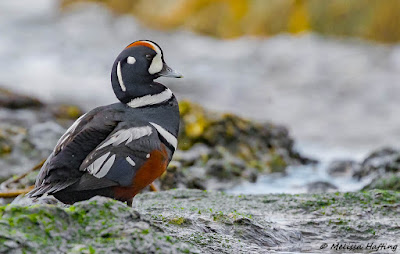 I was over in Victoria, BC for some business this week and got to spend time with some beautiful Harlequin Ducks. I have absolutely no decent photos of these birds because as soon as you look in their direction around here they are gone. They are very skittish! I love to watch them at Point Roberts, Ambleside, White Rock and Porteau Cove and I have tried in vain at all of these locations.

In Victoria I know they like to hang out at Cattle Point and Clover Point in Oak Bay.
I ended up finding a nice pair to photograph at Clover Point soon they multiplied to 8 birds on the rocks. They were tame as compared to our birds back home. The light was flat but I couldn't do anything about it nor complain. I could not get closer than 20 m because once I advanced closer than that I could tell it was beyond their comfort zone as they looked alert and defecated so I backed off and they went back to grooming.