December 28, 2017
Well today I got Bird 264# for my Metro Vancouver Year List. I was sitting at home on a very dreary and typical rainy winter Vancouver day when Joachim Bertrands texted me that he had a pure Western Gull in Delta.  You must be wondering why on Dec 28th I still didn't have a Western Gull for my Metro Vancouver year list. Well that is because I'm extremely picky. If I see a sign of hybridism I won't count it and I didn't see a pure one until this day. I know there were pure ones around this year but I just didn't put in the effort to look and when I did, I never saw one.

So I asked him to send me a screen shot because most gulls that people call Westerns here are hybrids. This is not a slight on anyone, it's just realism. Most birds up north here are hybrids "Olympic Gulls" (Glaucous-winged x Western) and some people count "mostly pure" birds but ones that still show signs of Hybridism. That is not ok for me personally. So what am I looking for? In an adult in winter we should see a dark mantled back (birds north of California are always a bit paler than their southern counterparts). We should also see an all white head with no streaking (even in winter). If you look at many of our Olympic Gulls they have the clear sign of hybridism with the streaky heads on adult birds in winter. The white secondary edges should also form a border on the folded wing and you should see extensive tertials and scapular crescents. The black wingtips blend into the wing.  If you are close enough you can see that the yellow eye has a yellow orbital ring around it.You can clearly see the eye features in Joachim's photos below. They also have a big drooping bright yellow bill with red gonydeal spot on the lower mandible. Note the bill of a Western is noticeably bigger than a Herring Gull's.

Anyways, he sent me the photo and it looked good to me. so I went out the door. It was pouring and cold but a Western Gull awaited. I texted Quentin Brown who I knew still needed a Western Gull. 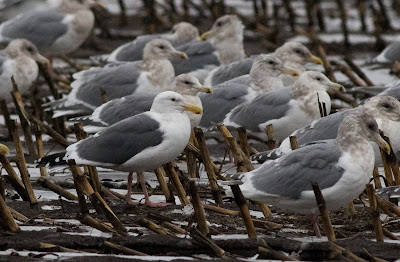 When I got there, the gulls had shuffled far from the road and a few fields inwards and over from where Joachim had it. The bird stood out immediately once I got the scope on the flock, a nice adult bird with a very dark gray mantle and clear white head.

So I could only get these poor digi-scoped shots.  The Bald Eagles were really making them shuffle around.


After that I checked out the surrounding flocks for Tundra Swans and found a couple at the end of 96th St North of Hwy 10. I never did find the Yellow-headed Blackbird reported on 104th St.


Quentin arrived shortly after, when it was bitterly cold and my hands really frozen. I got him on the bird after I spotted it in the closer grass field with some Trumpeter Swans. I was so glad for him, Bird # 259 for him and Bird # 264 for me.

Come on Rock Sandpiper or Bohemian Waxing! Only 3 days left....